A website opened on Wednesday to announce that Gido Amagakure‘s A Galaxy Next Door manga is inspiring a television anime next year. 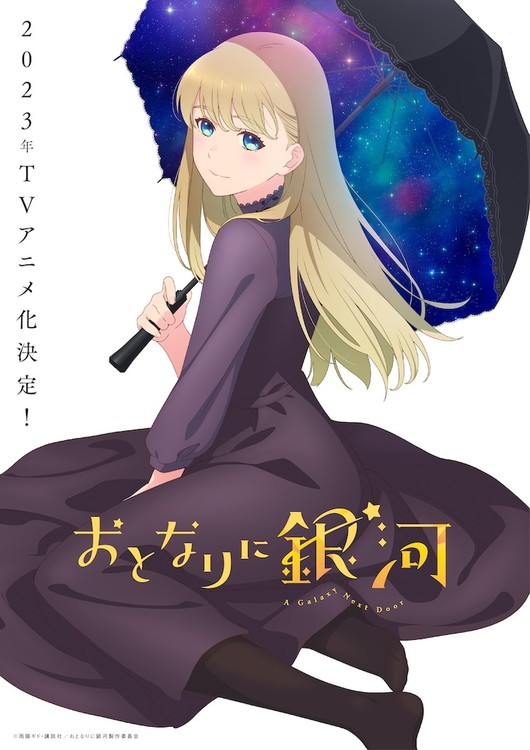 Kodansha Comics is publishing the manga in English, and it describes the “heartwarming romantic comedy”:

The new sweet and wild romantic comedy from the creator of the hit manga and anime about food and family, Sweetness & Lightning! A desperate manga artist, called on to support his two young siblings, meets a new art assistant. But her arrival isn’t just a small step, it’s a giant leap…

Since his parents died, manga artist Ichiro has barely scraped by, forced to support his two younger siblings on just a middle school education. He doesn’t even have time to learn how to use a computer, which forces him to keep wrestling with pen and paper. When his art assistants quit to strike out on their own, on top of juggling deadlines, family, and the constant fear of losing his job, Ichiro feel close to a total breakdown. But then a new assistant pops into Ichiro’s life, and his prospects immediately start to brighten! She’s an incredible artist, she always finishes on time, and she’s beautiful, to boot! But she also seems to know an awful lot about him, and, soon, she makes a confession that bends Ichiro’s mind beyond the confines of Earth…

Ryuichi Kimura (Aikatsu! Kemono Friends 2), is directing the anime at Asahi Production, and Gigaemon Ichikawa (Chikasugi Idol Akae-chan, The Fruit of Evolution: Before I Knew It, My Life Had It Made, Kedama no Gonjiro) is in charge of the series scripts. Fuyuka Ōtaki is designing the characters.

Amagakure launched the 12-volume Sweetness & Lightning (Amaama to Inazuma) manga in Kodansha‘s Good! Afternoon magazine in 2013, and ended it in August 2018. Kodansha Comics originally began releasing the manga digitally in English before it began print releases. Crunchyroll published new chapters as Kodansha published them in Japan, although it no longer hosts catalog chapters. The manga inspired a 12-episode anime that premiered in July 2016 and streamed on Crunchyroll.