A special program commemorating the 30th anniversary of the Sailor Moon anime revealed on Thursday that the “Shadow Galactica” arc, the final arc of Naoko Takeuchi‘s original manga, will get a two-part anime film project titled Gekijōban Bishōjo Senshi Sailor Moon Cosmos (Pretty Guardian Sailor Moon Cosmos the Movie) that will open in Japan in early summer 2023. A new official website opened and revealed a trailer and visual:

The films will feature a returning cast.

Tomoya Takahashi (Den-noh Coil, Gatchaman Crowds) is directing both films at Toei Animation. Kazuyuki Fudeyasu (all six JoJo’s Bizarre Adventure parts, Land of the Lustrous, PriPara) is returning to pen the scripts. Kazuko Tadano, the character designer for the original Sailor Moon anime, is continuing to design the characters. Yasuharu Takanashi (Naruto Shippūden) is returning to compose the music. Yumiko Soraga is the art director. 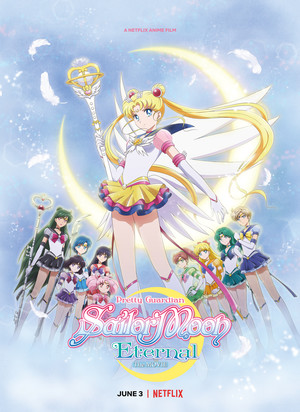 The first film was originally scheduled to open in Japan on September 11, 2020, but was delayed to January 2021 due to the spread of the new coronavirus disease (COVID-19) in Japan. The second film opened in Japan in February 2021. The films marked 25 years since the franchise last had a work that screened in theaters in Japan.

Viz Media licensed all three seasons for release in North America. The company released the first season of Sailor Moon Crystal on DVD and DVD/Blu-ray Disc combo pack in August 2016, the second season in February 2017, and the third season in December 2017.

Viz Media‘s release of Sailor Moon Stars, the fifth and final season of the original Sailor Moon anime that adapts the “Shadow Galactica” arc, marked the first time the season got a home video release in North America. Sailor Moon Stars originally aired for 34 episodes from 1996 to 1997.