Special, set 1.5 years after series finale, premieres on May 27

The staff of the live-action series of Kousuke Oono‘s The Way of the Househusband (Gokushufudō) manga revealed on Wednesday that the series will have a six-part special that will premiere on NTV on May 27 from 9:00 to 10:54 p.m..

The new special is set one and a half years after the final episode of 2020’s live-action series. It will feature stories such as Himawari at middle school and bringing home a boyfriend, Eguchi and Hibari job-hunting with the rest of the Tenjakukai, and Torajirō and Oshiroyama rivaling each other with okonomiyaki and Hiroshima-yaki. 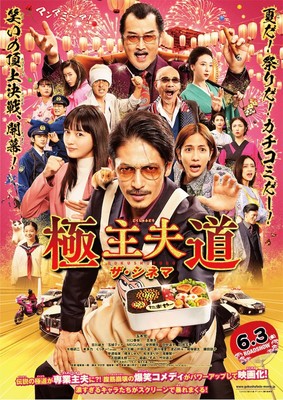 Gokushufudō the Cinema, the live-action film based on the manga, will open on June 3. The cast members from the manga’s previous live-action series are reprising their roles for the film, including Hiroshi Tamaki as Tatsu, Haruna Kawaguchi as Miku, and Jun Shison as Masa. The other returning cast members include Tamaki Shiratori as Himawari, Naoto Takenaka as Kikujirō Eguchi, Izumi INamori as Ibari, Kenichi Takitō as Torajirō, Yūta Furukawa as Sakai, Junpei Yasui as Sadogashima, Tina Tamashiro as Yukari, MEGUMI as Tanaka, and Michiko Tanaka as Ōta.

Tōichirō Rutō is back from the live-action series as the director of the film.

The live-action series premiered in October 2020.

Oono launched the manga on Shinchosha‘s Kurage Bunch website in February 2018, and Shinchosha published the ninth volume on March 9. Viz Media is publishing the manga in English, and it released the seventh volume on January 18.