The staff for the television anime of Sōichirō Yamamoto‘s When Will Ayumu Make His Move? (Sore Demo Ayumu wa Yosetekuru) manga announced the anime’s theme song artists on Saturday. The character Maki’s voice actress Kana Hanazawa performs the opening theme song “Kakehiki wa Poker Face” (The Tactic Is a Poker Face), while the character Urushi Yaotome (as voiced by Kanna Nakamura) performs the ending theme song “50 Centi” (50 cm). The CDs for both songs will go on sale on July 20. Below is the anime version of the cover for the “50 Centi” CD: 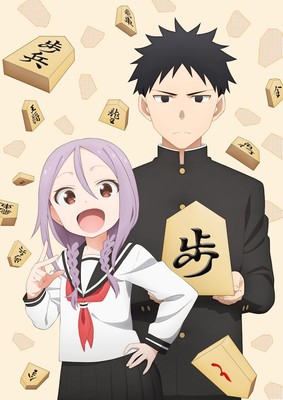 Kodansha USA Publishing publishes the manga in English, and it describes the story:

The new will they-won’t they romance from the creator of Teasing Master Takagi-san is here! Ayumu is in love with his senpai Yaotome, but he’s sworn not to confess his feelings until he can beat her at the board game shogi… The problem is, his love is obvious to Yaotome, and she can’t stop trying to trick him into breaking his vow! Fall in love again, fans of Don’t Toy with Me, Miss Nagatoro, Komi Can’t Communicate, and Shikimori’s Not Just a Cutie!

The anime will premiere in July on TBS and other stations.