Kakegurui is all about gambling and elite students throwing money like it’s nothing. The story of Kakegurui revolves around a pretty girl with a big brain who starts attending the Hyakkaou Private Academy. The students are categorized in this academy based on their gambling skills. If someone loses a game, he/she ends up becoming the slave of the gambler and gets a huge debt. You wouldn’t wanna go to such an academy, right?

Anyways, if you’re new to this anime, you must know its filler episodes. To find that out, you must scroll down! Then we’ll talk about its plot in detail along with some of the main characters in the anime! Let’s go!

Since this anime has no fillers, It’ll be a good idea to binge-watch it. If you’re into the concept of “gambling”, “elite kids”, and “intellectual beings” you’re at the right place. You should definitely watch Kakegurui and its animation is really good too! Anyways, let’s dig into the plot now!

The plot revolves around Yumeko Jabami who transfers to Hyyakaou Private Academy which is Japan’s most prestigious school. This school is different from other schools since the system of the school is run by the Student Council and the students are categorized on their gambling skills to a frightening level. The winners enjoy fame, money, and whatnot! On the other hand, the losers go through a lot. They become slaves and get in debt.

As Yumeko Jabami is introduced to the new academy by Ryota Suzui, she finds out that he lost a gamble and is now a slave to Mary Sataome. Yumeko decides to gamble instantly! Mary Sataome warmly welcomes her and wins the first round. On the other hand, Yumeko doesn’t simply back down. 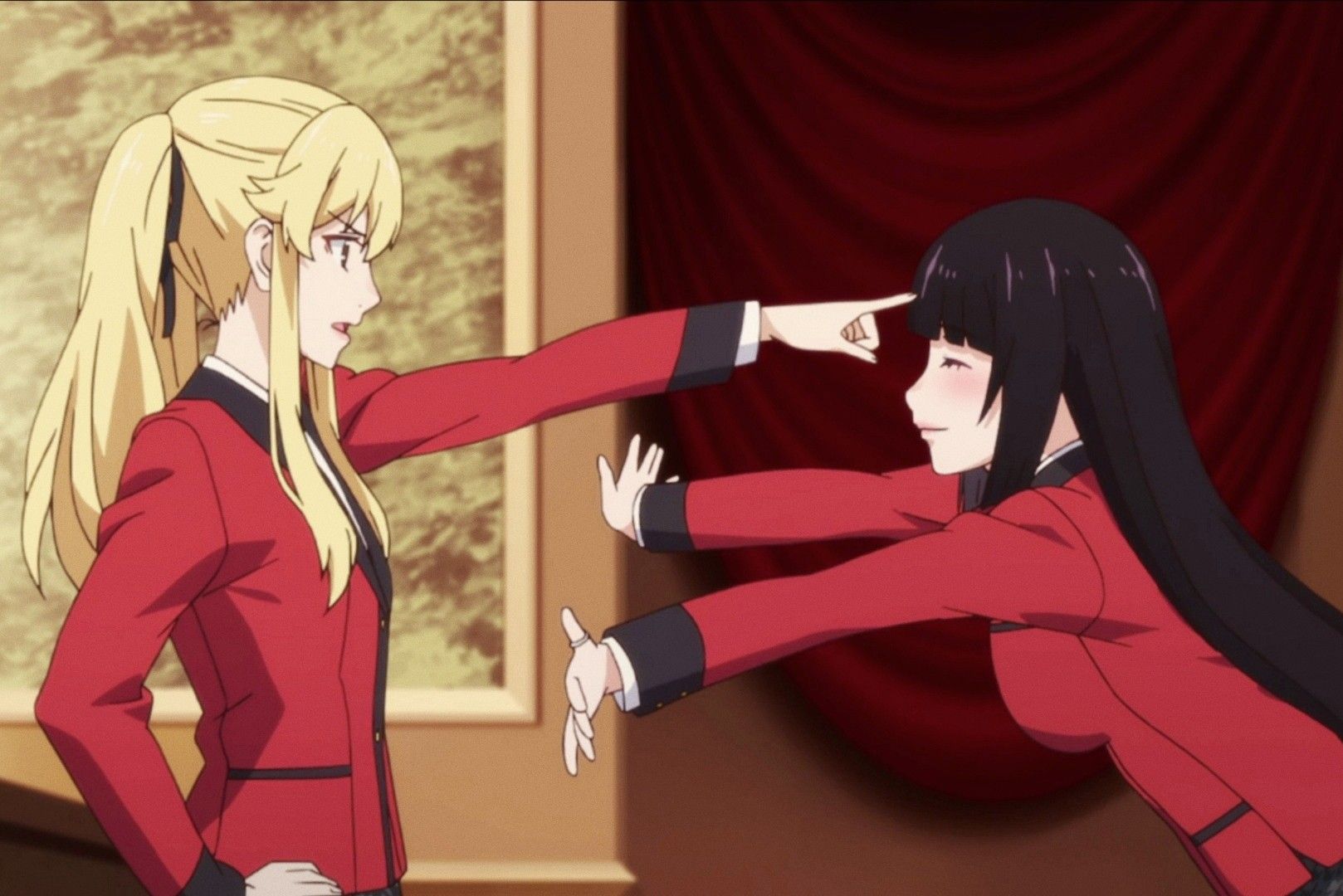 She finds out the reason why she lost. When she found out that Mary manipulated the class votes, she gambled again. The amount that she chose for gambling this time was 10 million yen in cash! The nerve our MC has! OOF! Anyways, Yumeko wins the gamble! She makes Mary her slave now, Ryota Suzui is now free!

Gaining popularity, Yumeko gets invited to a gambling game by Itsuki Sumeragi whose father is a well-known CEO of a miniature company in Japan. For this game, Itsuki chooses the cards made by her father’s company. The worth of this gamble is 20 million yen. She wins the match but Yumeko doesn’t fall down. Instead, she asks for a second round. 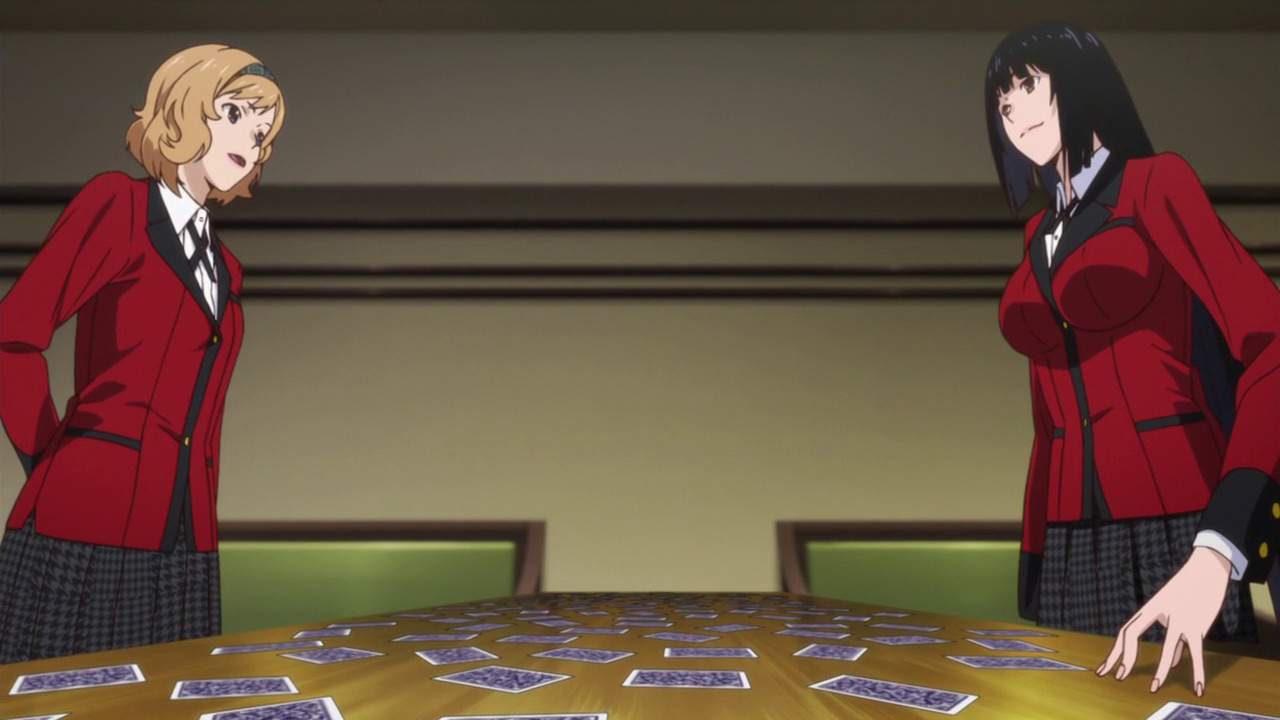 Moving on, Yumeko enters the Traditional Culture Club to find out that Mary is in debt of 40 million yen now and she’s helpless. Yumeko steps in and gets invited to this game of life and death. She declares that Yuriko has been cheating all this time through her magnetic accessories to manipulate the movement of swords. HOW SCARY! After a few matches, Yumeko loses and she ends up becoming their pet too.

Now that Yumeko and Mary have become pets they will receive “Life Schedules”, which will have their future schedule written on them. Now that the number of pet students keeps on increasing, the Student Council decides to come up with a fun game which is nothing more than Indian Poker. Through this game, the pets will be able to exchange their debts with others.

Whoever wins has a chance of getting rid of their debt and getting some money too! Yumeko and Mary, along with a delinquent student named Jun Kiwatari, are now in the same group. This fellow isn’t in any kind of debt but he thinks that he can make a profit of 10 million won by winning this game. Well, he sounds so sure about winning! 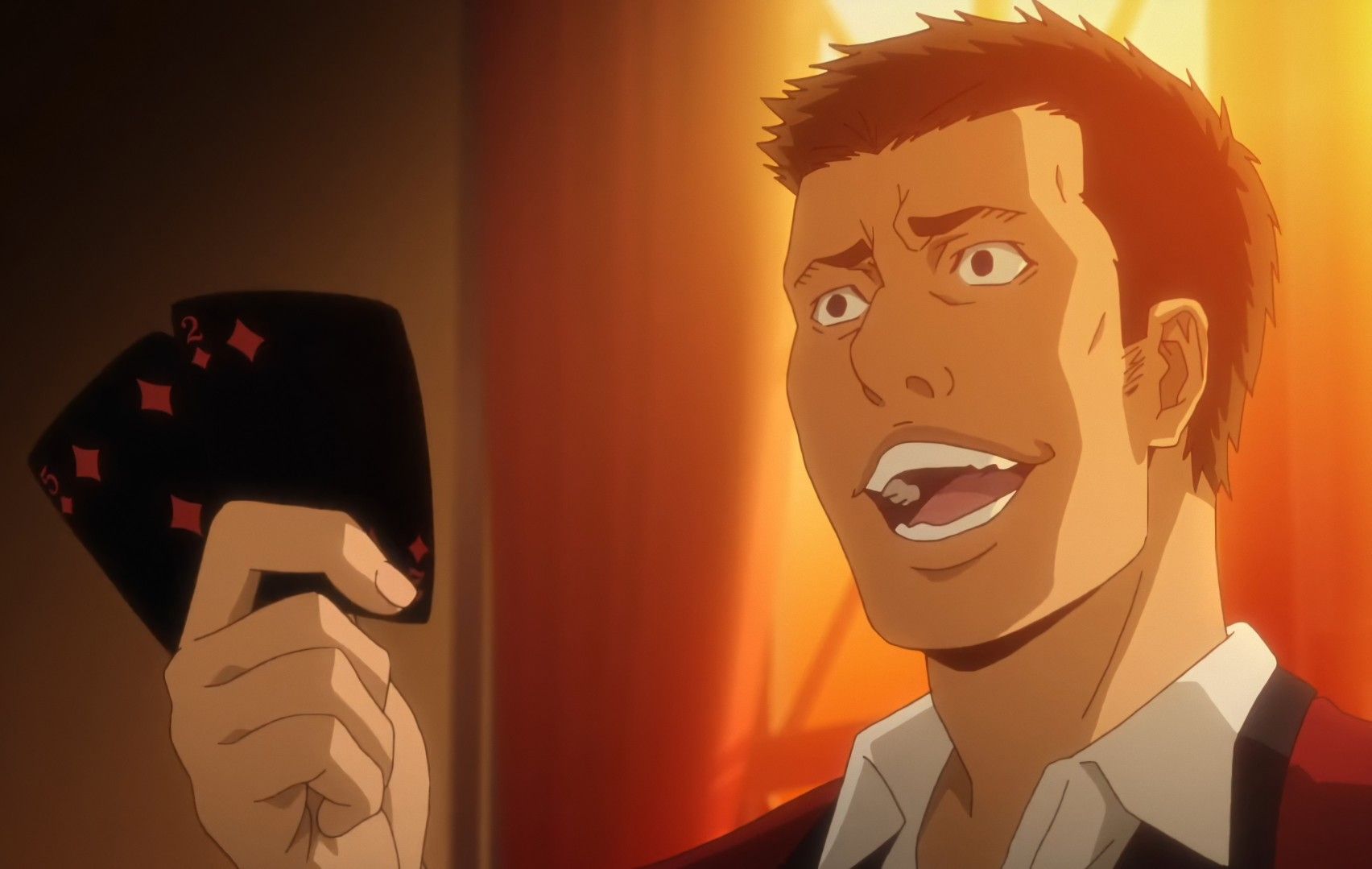 As the game begins, Yumeko and Mary find out that Nanami is cheating on him which puts Jun into a lot of pressure. In fact, Yumeko convinces Nanami to stand up for herself. Now, our boy is in danger of getting under a huge debt. As a result, Jun is now under 310 million debt that originally belonged to Yumeko.

Meanwhile, Yumeko is under 50 million debt. On the other hand, Mary’s debt has been cleared! So, that’s good for Mary. What will happen next? Is Yumeko going to gamble more to get rid of the debt she has or will she remain as a pet? To find out, watch Kakegurui!

Now, it’s time to discuss some of the prominent characters in the anime! 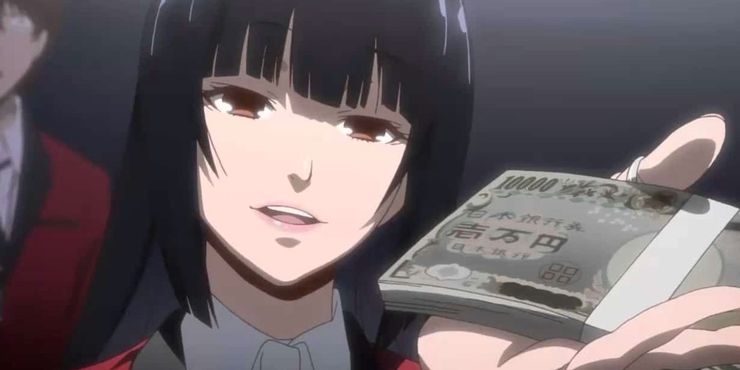 Yumeko Jabami is the female protagonist in the series. She’s gorgeous and smart at the same time. Yumeko has long jet-black hair and she’s seen wearing her academy’s uniform most of the time. Her uniform contains a red and black coat with black skirt and black stockings. They have such gorgeous uniforms though but it definitely looks super good on Yumeko Jabami.

Yumeko is a very charismatic and down-to-earth individual. She does her best to help her friends whenever they’re in need. She constantly catches the attention of other people around her. That proves her charisma, isn’t that right? Ryota Suzui is one of the male protagonists in the anime. He’s the guy who introduced Yumeko to the academy and is in fact, the first friend Yumeko had. He’s a friendly, and kind individual. But the sad fact is that people tend to use him for their own good. Yes, he’s very easy-going but since Yumeko stays with him now, everything shall be okay! Yumeko loves supporting her friends after all. Mary Sataome is also one of the main characters in the series. She was the first person to gamble with Yumeko and she lost. She became Yumeko’s pet but as the story proceeded, so many events happened which brought Mary and Yumeko closer together. Therefore, they became good friends at last. She’s a beautiful girl with blonde hair who tends to speak very rudely at times. 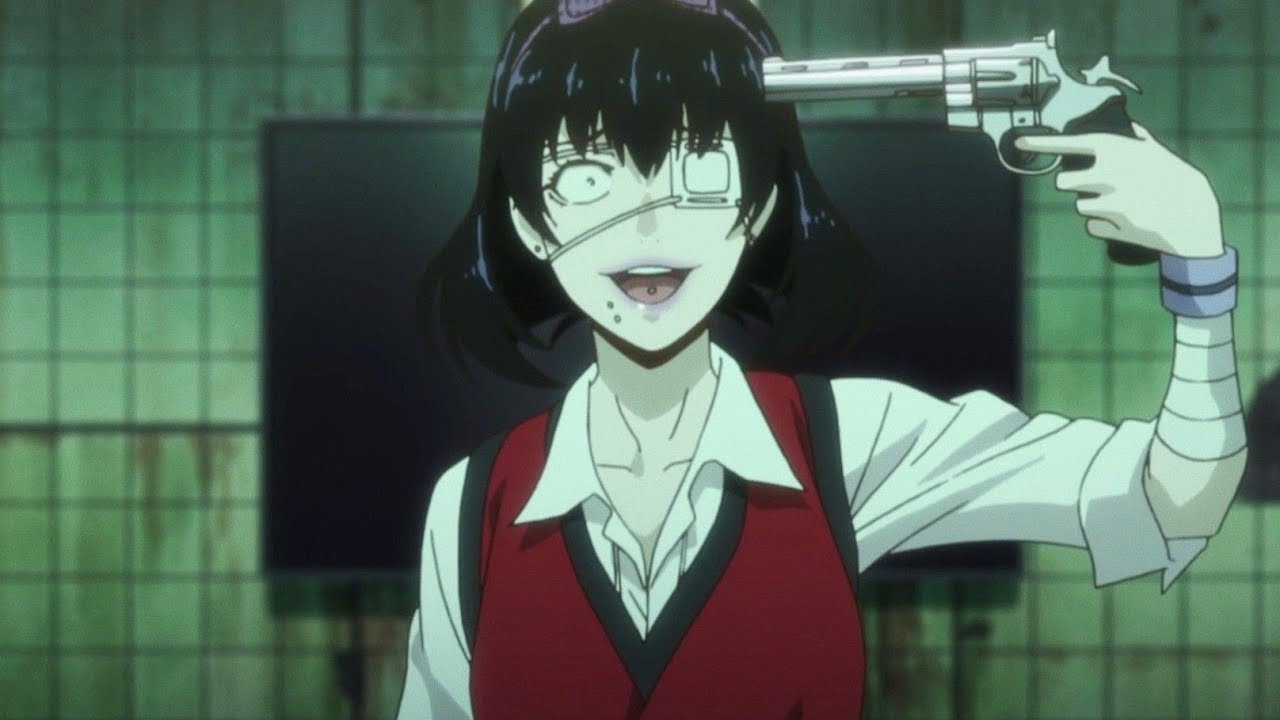 And this brings us to the conclusion of Kakegurui’s Filler List! I hope you guys enjoyed reading this blog and since there are no filler episodes in Kakegurui, you must start watching it! You won’t regret it since the characters are super cool and the animation is amazing as well! Do let us know your thoughts in the comments down below!