Starting on May 6, a limited number of Mubichike cards with a movie stand will go on sale.

The anime will premiere in theaters on June 17. 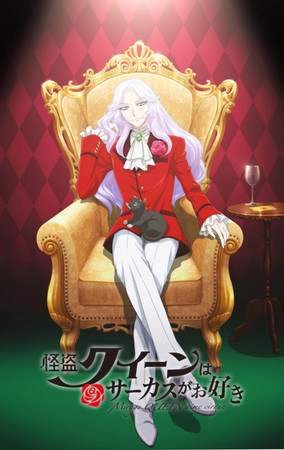 Saori Den (Pokémon episode director) is directing the project at East Fish Studio, and Mariko Kunisawa (Ascendance of a Bookworm, Orient) is writing the script. Kumiko Kawashima (Fantasista Stella) is designing the characters. Moe Hyūga (Steins;Gate 0, If My Favorite Pop Idol Made it to the Budokan, I Would Die) is composing the music. Toshiki Kameyama is the sound director at Bit Groove Promotion. Pony Canyon will distribute the anime.

The story centers on the Phantom Thief Queen, who is a person who can steal anything they desire. Their gender, age, and nationality are unknown. Together with their partners Joker and RD, they fly around the world in their airship. Now, Queen has their eyes set on a cursed jewel: the legendary “Rose of Linden.” However, there is an unexpected incident, and a mysterious circus troupe steals the jewel before Queen can. Queen will challenge the various members of the troupe, including a hypnotist, a magician, and an acrobat, in order to take back the jewel. For nothing is impossible for Queen.

The anime commemorates the 20th anniversary of the novel series. Kadokawa published the first novel under its children’s book label Aoitori Bunko in March 2002 with illustrations by K2 Shōkai. The latest novel shipped in July 2021. The project marks the first time the franchise is getting a video adaptation. The anime shares the same title as the debut novel in the franchise.