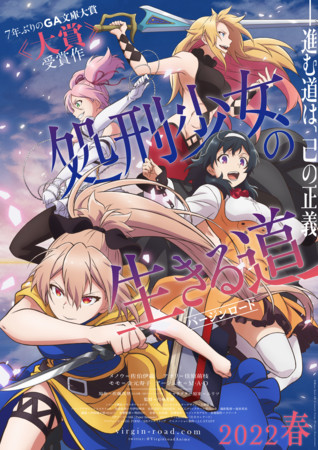 HIDIVE announced on Wednesday that it will begin streaming an English dub for the television anime of Mato Satō and Nilitsu‘s The Executioner and Her Way of Life (Shokei Shōjo no Virgin Road) light novel series on May 20 at 12:00 p.m. EDT. New dubbed episodes will premiere on Fridays.

The anime premiered on April 1. HIDIVE is exclusively streaming the anime, and Sentai Filmworks will later release the series on home video.

Yen Press is releasing the novels in English, and it describes the story:

The Lost Ones are wanderers who come here from a distant world known as “Japan.” No one knows how or why they leave their homes. The only thing that is certain is that they bring disaster and calamity. The duty of exterminating them without remorse falls to Menou, a young Executioner. When she meets Akari, it seems like just another job…until she discovers it’s impossible to kill this girl! And when Menou begins to search for a way to defeat this immortality, Akari is more than happy to tag along! So begins a journey that will change Menou forever… In addition to being an intriguing addition to the ever popular isekai genre of light novels, Virgin Road is an intriguing release due to the fact that it includes elements not commonly seen in light novels released in English—a female protagonist and a yuri storyline.

Yoshiki Kawasaki (Ascendance of a Bookworm assistant director) is directing the anime at J.C. Staff, and Shogo Yasukawa (Food Wars! Shokugeki no Soma, Hyperdimension Neptunia) is supervising the series scripts. Keiko Tamaki (Cells at Work! sub-character designs) is designing the characters for animation. Jin Aketagawa is directing the sound, and MICHIRU (Ascendance of a Bookworm, Given) is composing the music. EGG FIRM and SB Creative are producing.

Ryō Hirata is designing the props, and Teruhiko Niida is directing the art. Keishi Okuda is the color key artist. Issei Shibayama is directing the 3D CG. Shingo Fukuyo is the compositing director of photography, and REAL-T‘s Kentarou Tsubone is editing.

SB Creative published the novels’ first volume in July 2019, and the sixth volume shipped on August 15. The novels won the grand prize at the GA Bunko Awards in 2018. Ryō Mitsuya launched a manga adaptation of the novels in Square Enix‘s Young Gangan magazine in June 2020.