The June issue of Kadokawa‘s Monthly Comic Alive magazine revealed on Wednesday that Studio 3Hz‘ Healer Girl original anime will get a manga spinoff titled Healer Girl espressivo that will launch in the magazine’s next issue on May 26. Imo Ōno will draw the manga. 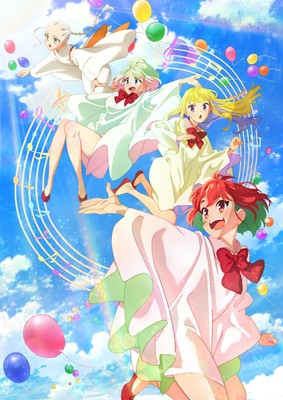 The anime premiered on April 4. Crunchyroll is streaming the anime as it airs in Japan.

The story is set in a world where three schools of medicine are pervasive: Western medicine, Eastern medicine, and “vocal medicine.” The healing of illness and injuries via songs is a special technique that not only improves the metal health of patients, but also the mental health of doctors. Such “Healers” strive to sing when called upon to respond to the health and anxiety of patients and doctors alike. The anime depicts the healer girls in training at the Karasuma Vocal Medical Institute.

In real life, “Healer Girls” is also a new unit of the anime’s four main voices actresses. The unit performs the opening theme song “Feel You, Heal You” and the ending theme song “Believe like Singing.”