The Japanese government announced on Thursday that director Hideaki Anno is receiving the spring 2022 Medal with Purple Ribbon. The medal is awarded to “individuals who have contributed to academic and artistic developments, improvements and accomplishments.”

Yasushi Akimoto, the founder of the AKB48 idol group franchise and the creator of the One Missed Call (Chakushin Ari) novel and film franchise, is also receiving the Medal with Purple Ribbon.

Anno is one of the seven co-founders of legendary anime studio Gainax. The company was first noted for producing the anime shorts that opened the Daicon III and Daicon IV science-fiction conventions in 1981 and 1983. The 1987 film Royal Space Force – The Wings of Honnêamise was the studio’s first major anime project, and like many of the Gainax founding members, Anno wore many hats in the film’s production, including animation director, layout designer, production designer, and special effects artist. Anno would remain a fixture in the animation of the studio’s later works.

Anno is perhaps best known for the studio’s seminal Neon Genesis Evangelion television anime, which spawned a massive media franchise with films, spinoff manga and novels, and many other related media. The work was influential to the late-night anime world, and many later otaku media and anime creators cite it as an influential work. Anno later founded the Studio Khara in 2006, and parted ways with Gainax in 2007.

Anno is also the writer and co-director of the Shin Godzilla film, the writer of the upcoming Shin Ultraman film, and the director and writer of the upcoming Shin Kamen Rider film. Shin Ultraman will open on May 13, while Shin Kamen Rider will open in March 2023. All three are some of Japan’s most well-known pop culture characters, representing kaiju (giant monster) films and tokusatsu (special effects) films. Anno has not shied away from his love of tokusatsu and kaiju media, and has openly cited their influence on his work. 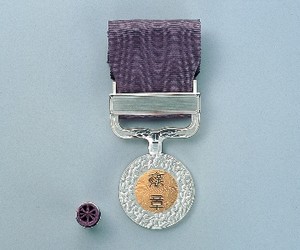 Past recipients of the honor include:

Crypton Future Media President and virtual idol Hatsune Miku’s figurative “father” Hiroyuki Itō also received a Medal with Blue Ribbon in 2013. The medal is “awarded to individuals who have made prosperous efforts in the areas of public welfare and education.”