Titan Comics revealed to ANN the cover for the second volume of the new director’s cut edition of Takashi Okazaki‘s 1999 Afro Samurai seinen manga. The second volume launches on October 4. 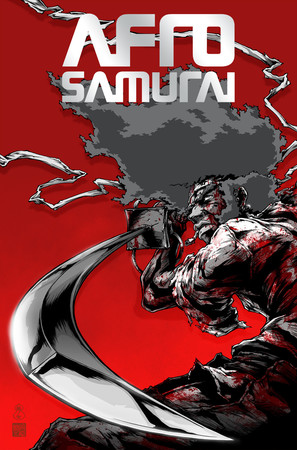 The first volume of the director’s cut edition will launch on July 26. The new edition will feature specially commissioned cover art and a foreword by Okazaki.

The release commemorates the 15th anniversary of the anime adaptation. It is available for pre-order on retail websites such as Amazon and Forbidden Planet.

Inspired by Okazaki-san’s love of hip hop music and American pop culture, the story, set in a feudal futuristic Japan, follows the young Afro Samurai who witnesses his father, the holder of the No.1 headband, being challenged and killed by the No.2 – a lethal gunslinger named Justice. Swearing revenge, he starts off on a bloody path of retribution that will eventually make him the No.2 warrior and lead to a final dramatic face-off with his father’s killer.

Namco Bandai Games released the Afro Samurai videogame adaptation in North America and Europe in 2009 for the Xbox 360 and the PlayStation 3. The Afro Samurai 2: Revenge of Kuma volume 1 game launched on September 2015.