Love After World Domination is an anime tailor-made for me. I don’t know if I can give you an accurate, unbiased review on this one – I’m basically going to gush and that’s it.

The premise is simple yet cute: the hero team Gelato 5 is battling against the evil forces of Secret Society Gekko. Gelato 5 is led by the dashing Fudo Aikawa (the red ranger, of course), while Gekko has their own trump card in the nefarious Reaper Princess, Desumi Magahara. The two leaders wage an unending battle of justice versus evil, destined to be bitter enemies to the last…except that, well, they’re dating.

As it turns out, Fudo became enchanted by Desumi on their first meeting and started following her on social media, becoming a literal reply guy befire asking her out. The show leans heavily on the fact that both Fudo and Aikawa are incredibly innocent goobers when it comes to romance and this pays off handsomely; they haven’t even held hands until the third date and consider it scandalous (entwining fingers is apparently an “advanced technique”).

Fudo spends most of his time working out and thinking about Desumi, and as a fellow guy who works out and thinks about his wife I appreciate the laser-specific relatability. There’s also plenty of tokusatsu fanservice specifically for myself and fellow rubber suit enjoyers. The entire premise smacks of Kyosuke and Zonette’s forbidden romance from Carranger, the Gekko goons look like Shocker goons (complete with the EEEEE noise when they get hurt), and even the show’s own contributions to the genre is great – the Culverin Bear is simply a good kaijin design. The anime adaptation also adds lots of little touches that the manga could not by dint of the medium, such as the heartbeat sound when Fudo and Aikawa are about to hold hands or the extended, colorful henshin sequences. The opening is particularly great, since it is appropriately a duet and features lots of trumpets like a Showa-era theme song.

Whether the cutesy premise can sustain an entire series remains to be seen, but I really liked the first volume of the manga when I read it and I can see myself enjoying this entirely too much. 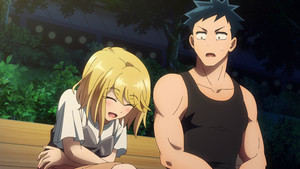 Your enjoyment of this episode is going to highly depend on how much you dig its random cutesy moments.

The opening shtick of sneaking away from the fight is the same as last episode but still as entertaining. The twist here is that Fudo and Desumi are awkwardly trying to memorialize their relationship in photos but not sure how to go about it. I like the detail of Fudo using a disposable camera (the satisfying foley work for the clickety-clack of those old analogue cameras sure does bring back memories) to try and capture this brief moment in time.

All of the emotions and reactions from our two leads are super exaggerated but that is the nature of the material and, truth be told, matches the kind of intensity such a relationship has. They are essentially in a long-distance relationship, though the distance is not exactly geographical. Much like an LDR couple who have been apart for some time, getting together involves a lot of intense emotions and a desperate scramble to squeeze as many experiences into what little time they have.

There’s also the fun bit about Fudo being quite popular and having a growing fanbase. The show has gone out of its way to remind us of Desumi’s *ahem* Assets, but it’s nice that Fudo also gets his time under the fanservice spotlight. Gelato Yellow patting the proverbial hood of Fudo’s pecs and proclaiming “These Bad Boys can hold so many workouts” is a great bit.

The date itself is also a good setup for awkward comedy. Fudo is wrestling with that most fundamental of crises: what does a good date look like? He ends up taking the wrong advice on both ends so to speak, but ultimately arriving at the appropriate conclusion. In the end, authenticity matters more than anything, and by being true to himself he ends up being true to Desumi as well (even if he is still a goofball). 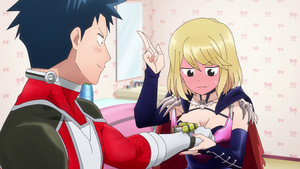 There are dozens of great gags in this episode. My absolute favorite is the slow-motion bits where Desumi has to hide Fudo before he gets spotted in the Gekko base. It’s a simple gag but the voice modulation really sells it. We also get a great example of the writing principle known as Chekov’s shoulder-mounted Bear Cannons, where if a writer introduces shoulder-mounted bear cannons in act 1 then they would definitely be used to destroy a super-villain’s lair in act 3.

While the plot elements of this episode are a bunch of wacky fun, it’s the small, relatable moments that really count. The super-accurate pangs of puppy love as Fudo and Desumi both think about each other and are upset because they haven’t seen each other in so long is, as they say, a mood. There’s lots of moments of Fudo just randomly getting in some reps, which I appreciate as someone who also sneaks in curls and sit-ups and pushups throughout the day. Fudo awkwardly talking to “Suri” was great for a few belly laughs too. Plus the joy of spending time with a significant other at an amusement park, the moment where Desumi is stressed about making the call, and Desumi calling Fudo’s house and getting his mom instead are all scenes that bring back a lot of memories for me.

There are really too many loveable, tiny moments to mention here. I love the copious reaction faces, and the running gag of playing Uno together. I love Heat Princess talking entirely in sounds of compressed gas. I love the sound effect of Desumi feverishly smashing the red button to venture an idea. This show is really hard not to fall in love with, and folks: I think I’m head over heels for it.


Grant is the cohost on the Blade Licking Thieves podcast and Super Senpai Podcast.

Love After World Domination is currently streaming on
Crunchyroll.