Discotek announced on Wednesday that it will release the Heart and Yummie (You Are Umasou), Lupin III: Prison of the Past, Holmes of Kyoto, Case Closed: The Fist of Blue Sapphire, (Detective Conan: Fist of Blue Sapphire), and Violence Jack anime on Blu-ray Disc on July 26. The company will release the Powered Armor Dorvack anime on standard definition Blu-ray Disc on the same day.

The company’s release of Heart and Yummie will be a limited edition collection, and there will only be 2,000 copies total. The Blu-ray Disc will include both the movies and television anime shorts in Japanese with English subtitles..

Discotek‘s release of the Lupin III: Prison of the Past television anime will include the original Japanese version with English subtitles and a new English dub. The special premiered in November 2019. 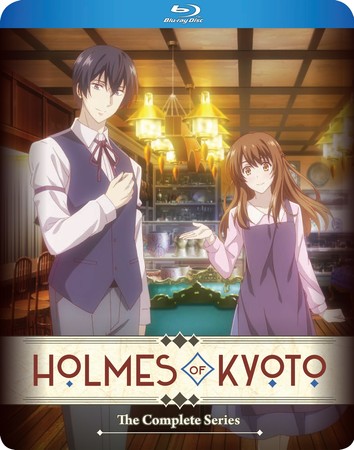 The company’s release of Holmes of Kyoto will include all 12 episodes in 1080 HD in Japanese with English subtitles. The Blu-ray Disc will be limited to 1,500 copies. The television anime adaptation of Mai Mochizuki‘s Holmes at Kyoto Teramachi Sanjō (Kyōto Teramachi Sanjō no Holmes) mystery novel series premiered in July 2018. Crunchyroll streamed the series as it aired in Japan.

Discotek‘s release of Detective Conan: Fist of Blue Sapphire (Meitantei Conan: Konjō no Fist) will include the original Japanese version with English subtitles and a new English dub. The movie is the 23rd Detective Conan anime film and it opened in Japan in April 2019.

The company’s release of Violence Jack will feature a new 2K transfer of the uncensored version of the anime, marking the first completely uncensored release of the anime anywhere. Episodes 2 and 3 will release in both 16:9 and 4:3 formats. Discotek released the OVA series on home video in 2015.