Season 2 of The Rising of the Shield Hero just began airing, and it looks amazing so far. Many new interesting characters are making their debut in the series, but what’s even more exciting is that many mysteries will start to be revealed to us real soon!

We won’t deny that the ones that are making this show worth watching are the amazing female characters that we got.

So here is a list of the Best The Rising of the Shield Hero Girls!

WAIFUS  OF  THE RISING OF THE SHIELD HERO

Therese isn’t exactly an ally of the Shield Hero. She and her partner, L’Arc Berg Sickle, came from another world, Glass’s world to be exact, to save their home. Her goal is to kill the four Cardinal Heroes in order to stop the waves from happening in her own time. Who could blame her, right?

When she had to face Naofumi for the first time, it was clear that she wasn’t thrilled about it. She was determined to hurt the fewest people possible. After each of her attacks, she would use a spell to stop the damage that she, herself, had caused.

She has ivory skin and bluish hair that sparkles like jewels when hit by the sunlight, and her personality is just as beautiful as her appearance. She was a gentle and kind woman, pure, sweet, and courteous, who was forced to soil her delicate hands for the sake of her people. 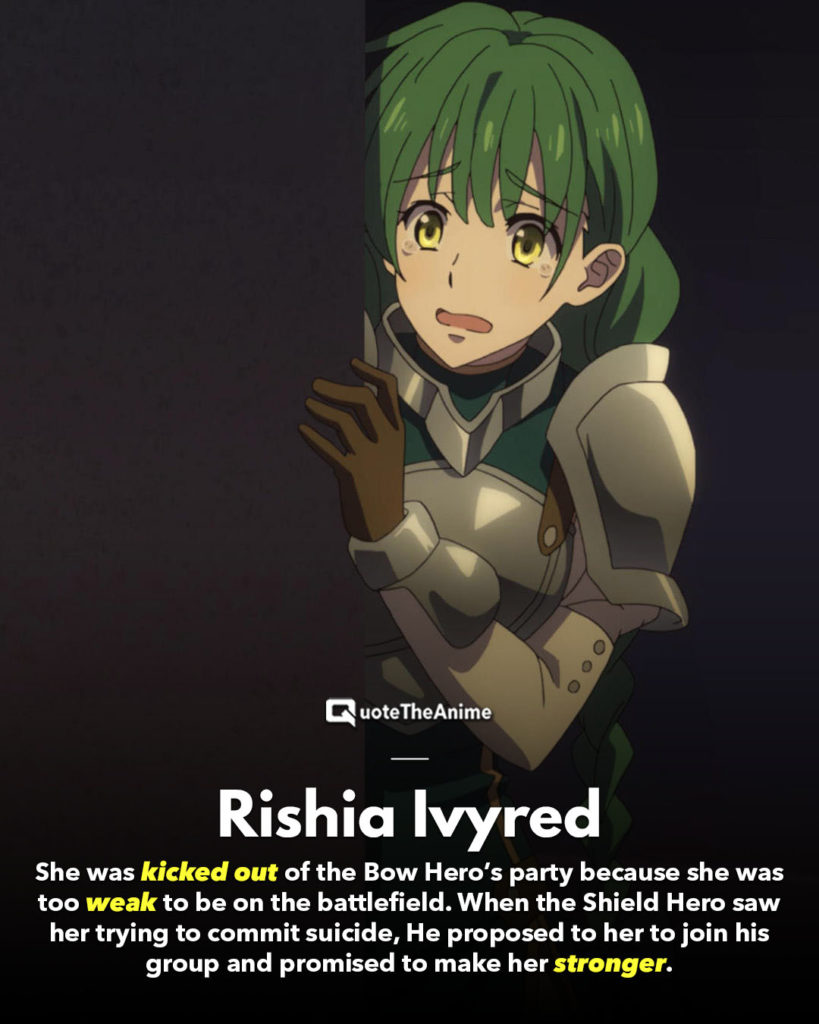 When she first appeared in the series, Rishia was a pathetic character who was always looking down on herself, and for good reasons. She was kicked out of the Bow Hero’s party because she was too weak to be on the battlefield.

The Shield Hero saw her trying to commit suicide after she fell into despair and decided to give her a chance to regain her pride.

He proposed to her to join his group and promised to make her stronger so the Bow Hero would accept her back into his ranks—a proposition that she accepted. 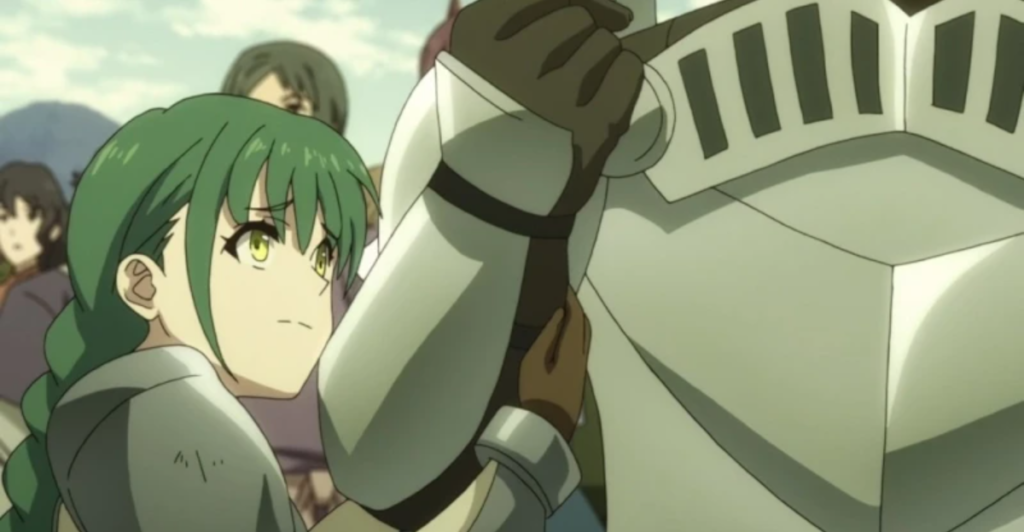 It took her a lot of time to level up. At the end of her journey, the caterpillar turned into a butterfly as she turned out to be one of the Seven Star Heroes, the Projectile Hero.

At the moment, she lives in Rock Valley and has become an instructor of the Hengen Muso style. She also often assists the Legendary Heroes to accomplish their tasks.

She has come a long way from where she started off. The girl that no one would entrust their back to is now a reliable warrior that has saved the day more than once. 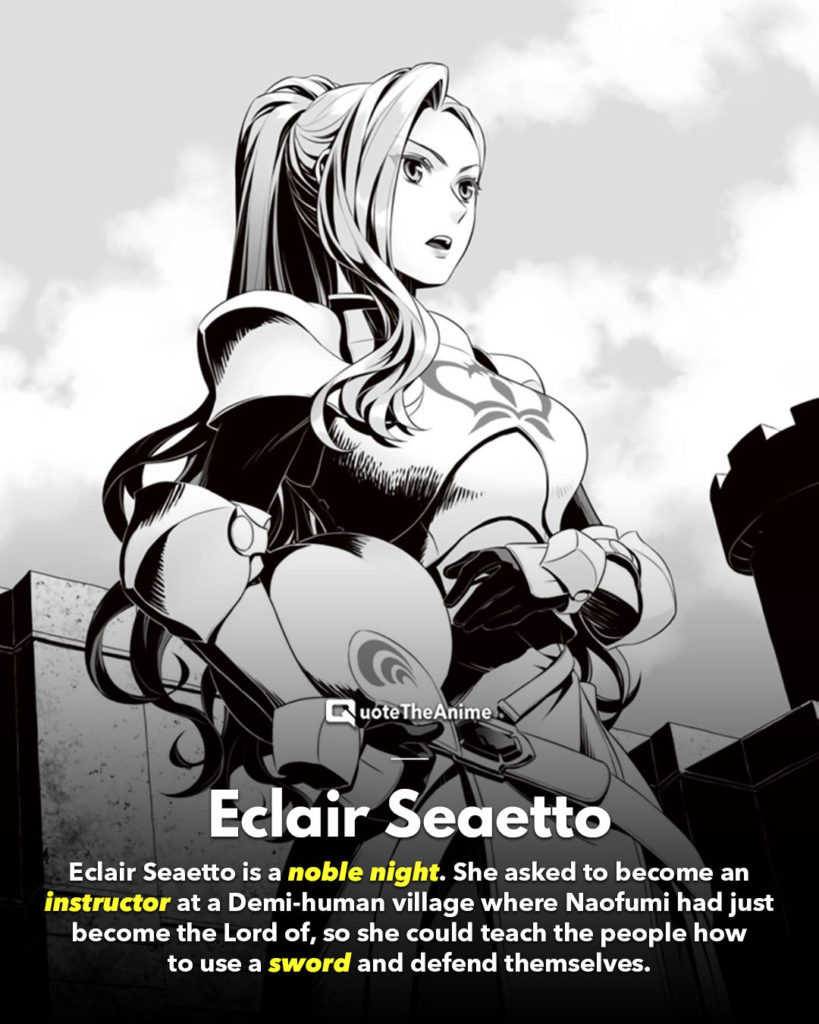 Eclair Seaetto is a noble night that deserves all the respect in the world. Her father sinned, and because of his actions, Raphtalia’s home was decimated.

She promised herself that she would someday pay back for her family’s sins, and when she saw an opportunity to do so, she grabbed it.

Naofumi had just become the Lord of a Demi-human village. She asked to become an instructor there so she could teach the people how to use the sword and defend themselves. 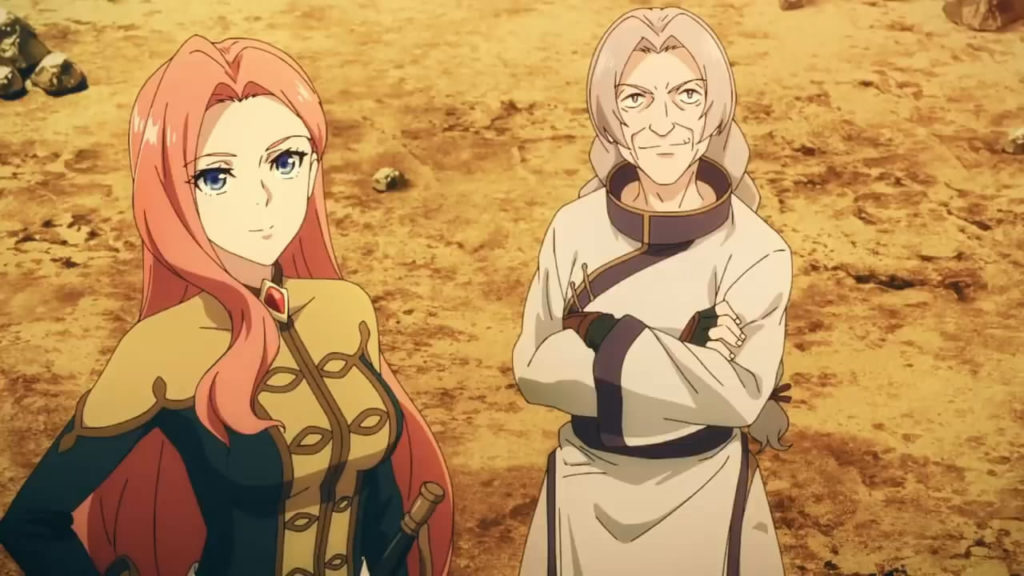 She even became Rishia’s and Raphtalia’s personal teacher. Raphtalia, who was already pretty powerful with a sword in hand, thanked her from the bottom of her heart as all her techniques drastically improved.

Eclair rejected her thanks, saying that this was not even close enough to repay her for all the pain she went through because of her father.

Eclair is one of the rare people who considers Demi-humans their equal. She does not discriminate and shows respect to all, no matter their rank. She holds all her beliefs high with pride, uncaring of anyone’s opinion. 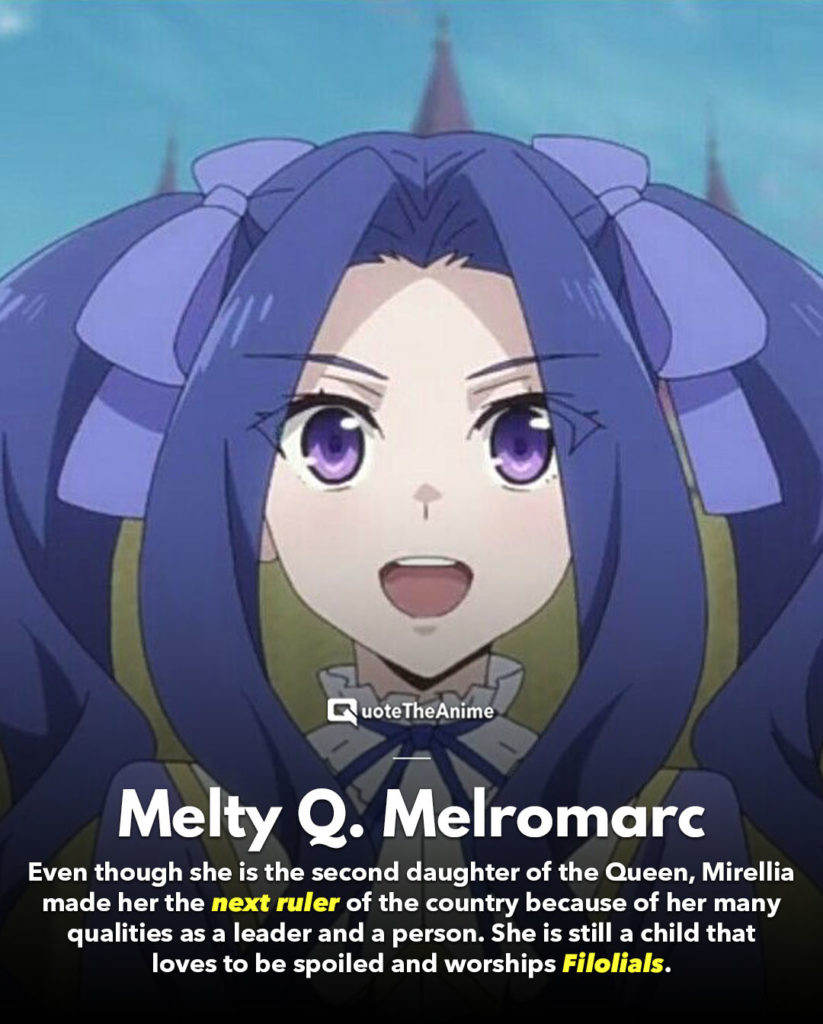 Melty has a very important role in the series. She was the one who opened Naofumi’s heart and let him put his trust once again in people.

Very different from Raphtalia and Filo, she took the initiative to approach him first and kind of forced him to accept her into his party. 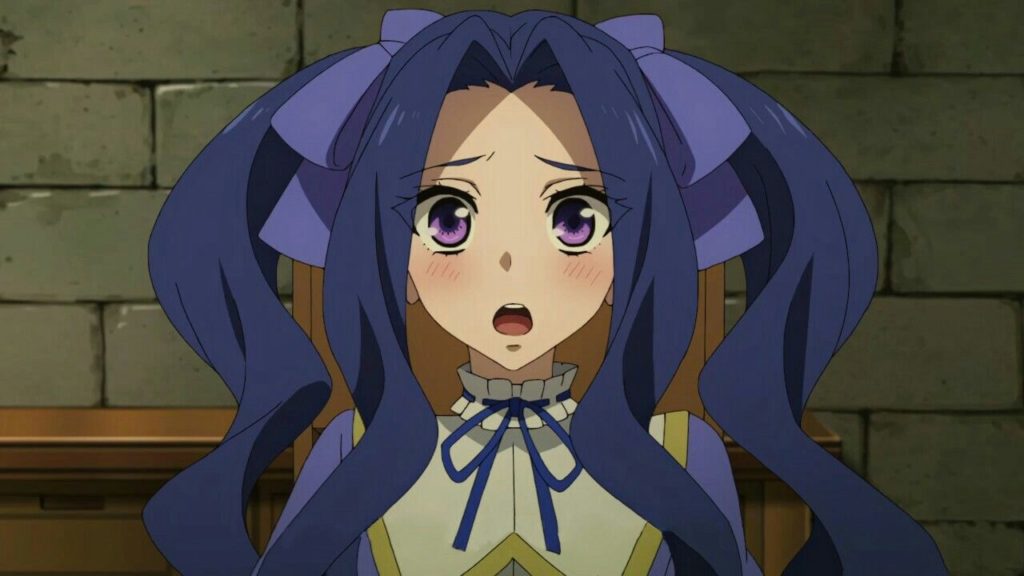 Even though she is the second daughter of the Queen, Mirellia made her the next ruler of the country because of her many qualities as a leader and a person.

On the outside, she is the perfect image of a princess: mature, polite, and respectful. However, on the inside, she is still a child that loves to be spoiled and worships Filolials. She actually got lost more than once because she was distracted while playing with them. 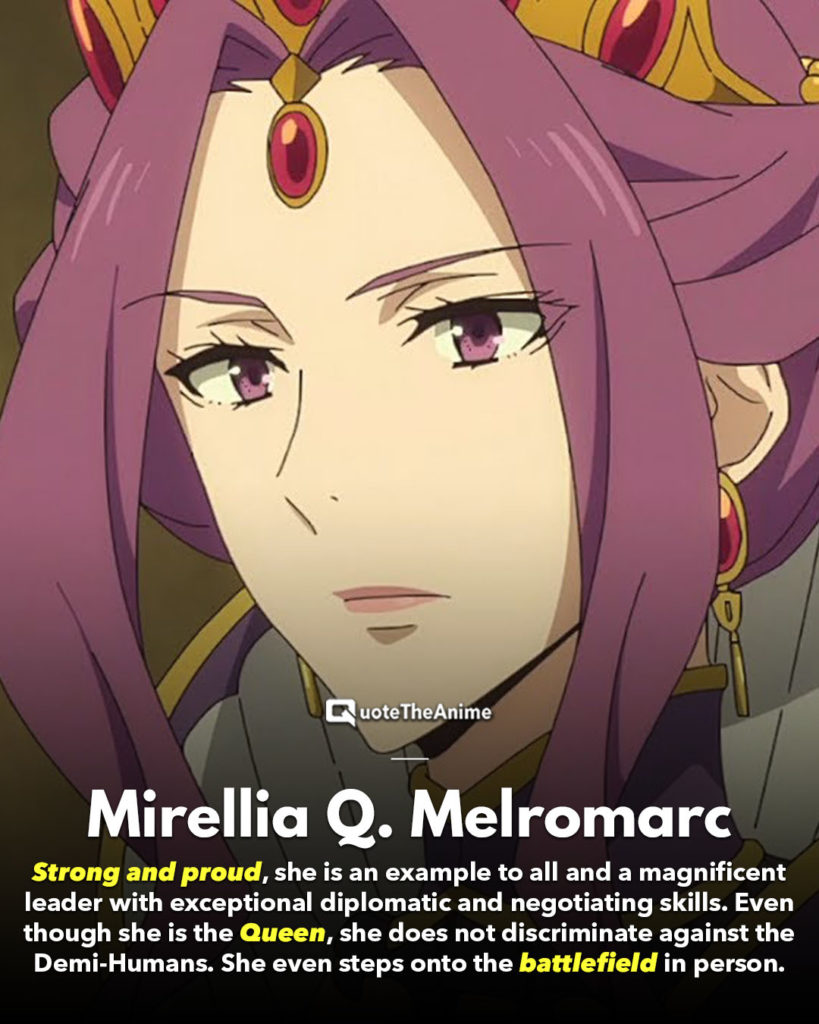 The Queen of Melromarc is really an incredible character. Strong and proud, she is an example to all and a magnificent leader with exceptional diplomatic and negotiating skills.

When she was away, her husband took control of the country, and he and Malty put Naofumi through hell.

When she came back, she was determined to make things right, and she did. She cleared the Shield Hero’s name and even sentenced to death her own daughter and her husband, so the Hero could really feel like he got justice. 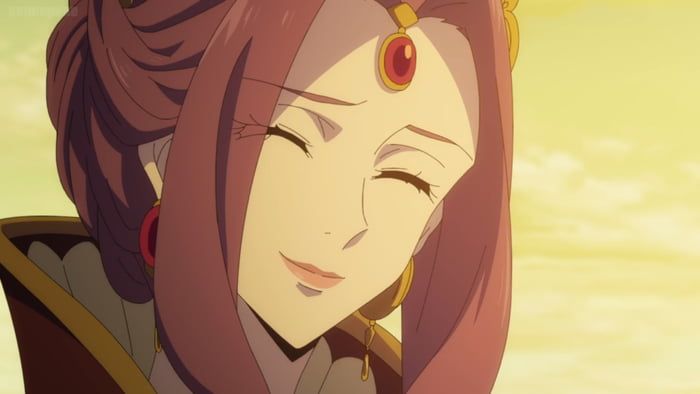 Even though she is the Queen, she does not discriminate against the Demi-Humans. She is fair and just—the kind of ruler that will always put her people above all.

She never abused her power and stepped in person onto the battlefield to find her loyal soldiers who gladly offered their lives in her name.

Despite the Queen’s imposing look, she also has a childish side as she adores Filolials just as much as Melty and can’t contain her excitement when she sees one. It’s just super cute when she loses control. 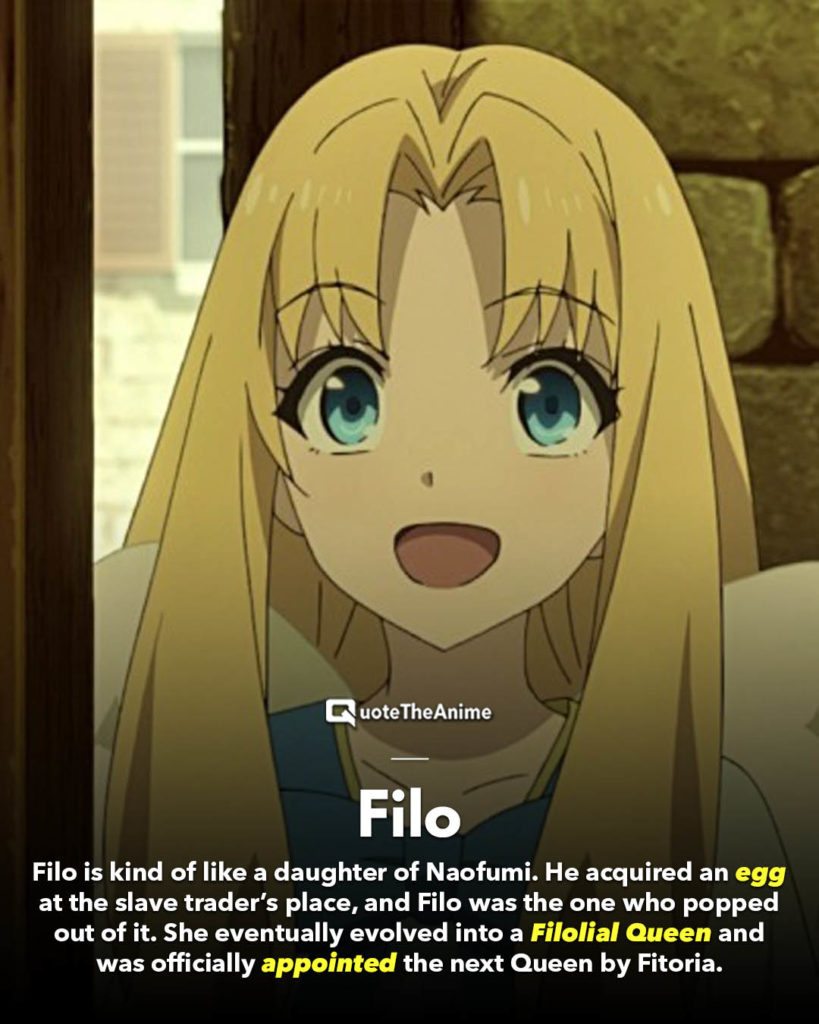 Filo is kind of like a daughter of Naofumi. He acquired an egg at the slave trader’s place, and Filo was the one who popped out of it.

He raised her ever since she was born. In the beginning, he thought that she was a normal Filolial. However, Filo turned out to be much more special.

She evolved into a Filolial Queen and was officially appointed the next Queen by Fitoria after she witnessed her strength and unwavering determination during a one-on-one battle. 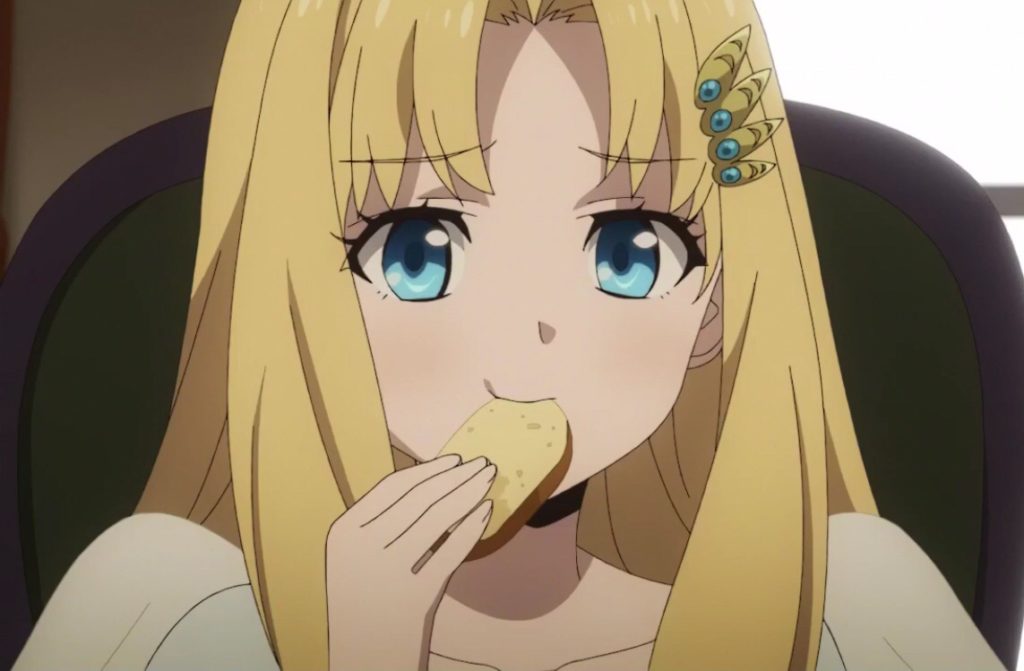 Filo loves her stomach above all. She eats as much as an entire battalion. She is a spoiled kid that is always asking for her master’s affection.

Despite her default, she’s a hard worker who will always put her life on the line to save others. She’s very talkative, extremely competitive, and super caring. It’s impossible not to love her.

In her Filolial form, she is huge and super adorable that you’d wish you could cuddle with her forever. While in her human form, she looks like a little angel—just beautiful! 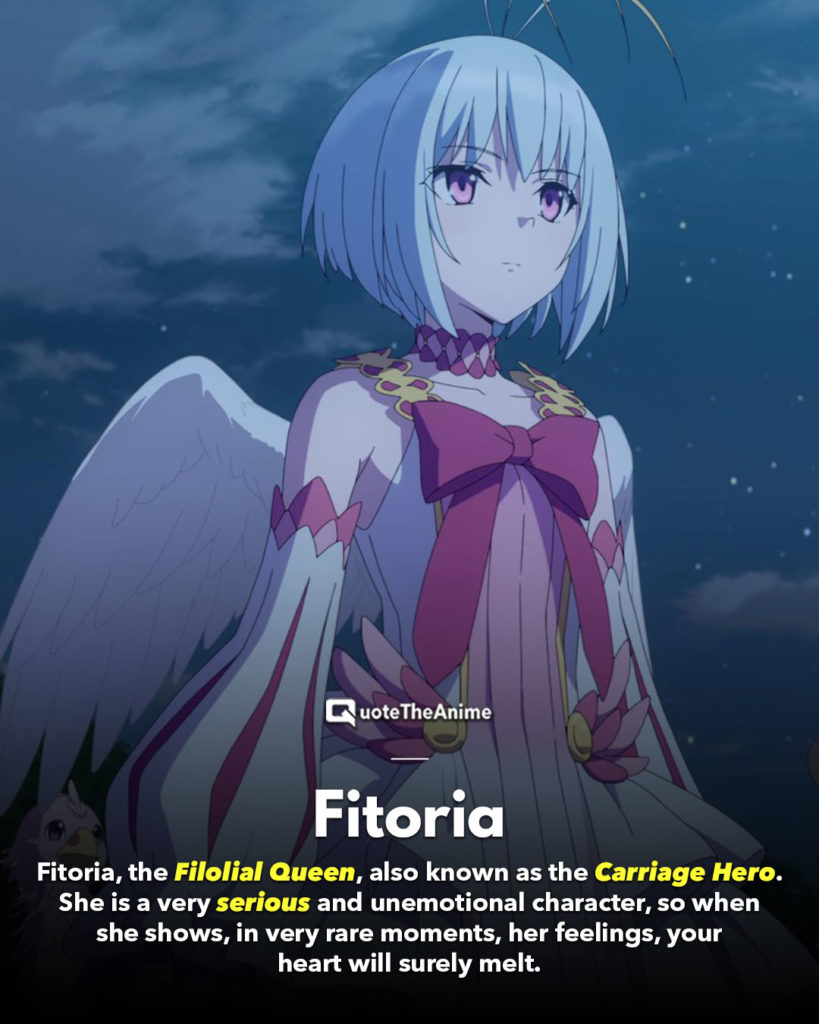 In terms of beauty, the one who wins the contest between all those girls is undeniable. Fitoria, the Filolial Queen, also known as the Carriage Hero.

It would be a disgrace to describe her beauty just in words. Just know that when she first appeared, most watchers probably ended up holding their breaths.

She is a very serious and unemotional character, so when she shows, in very rare moments, her feelings, your heart will surely melt. 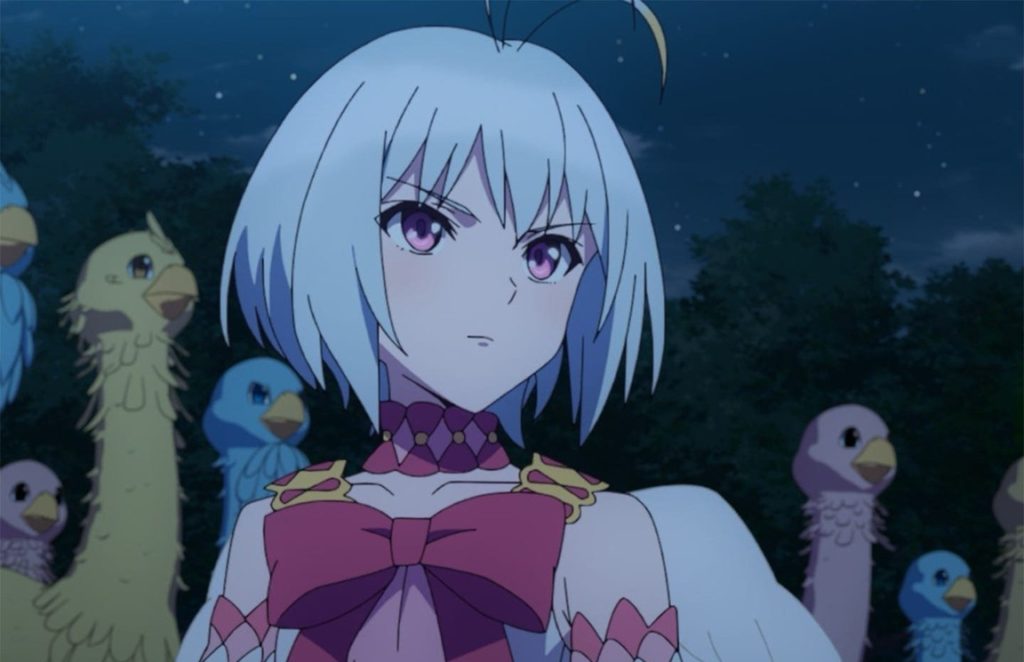 Although she looks like a child, Fitoria is kind of overpowered. She managed to defeat a gigantic dragon with just one kick while the Shield’s Hero party was having a hard time scratching the beast.

She cares deeply for the world she lives in and will use all the power that she possesses to protect it, even if it means killing her own ally. Terrifying! 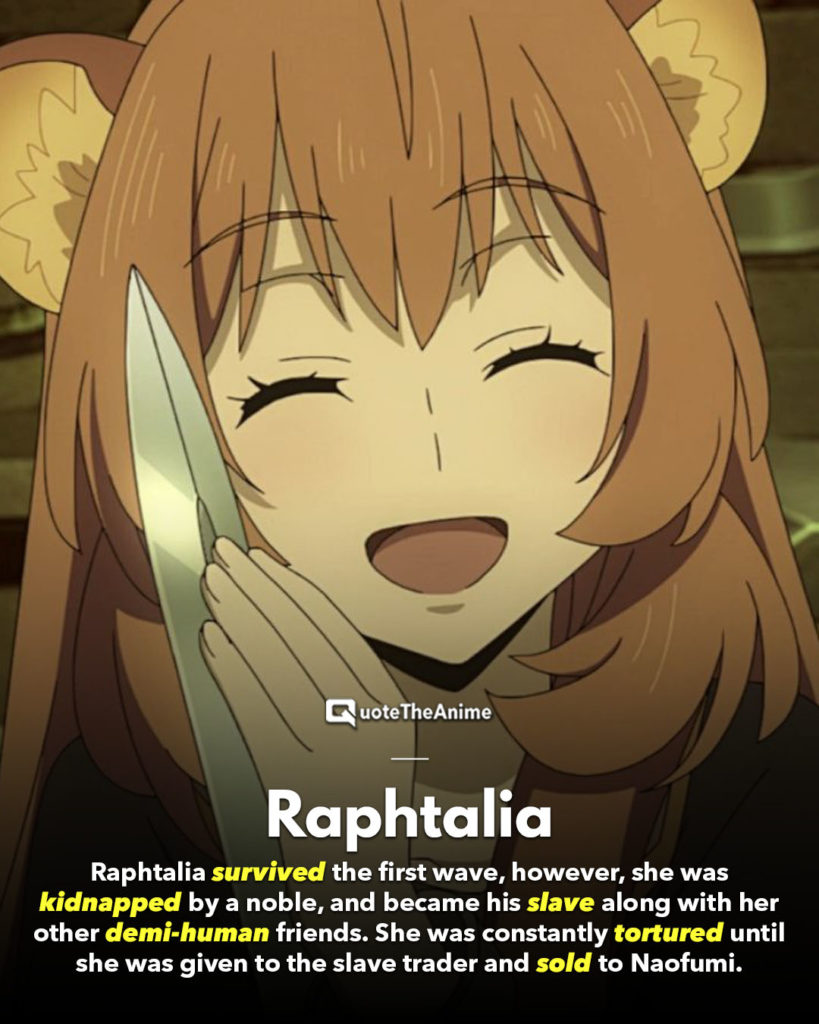 Y’all better guessed right! Of course, it is Raphtalia who gets the first spot in our little ranking list. She is the character who is picking up the show all on her own.

Her backstory is heartbreaking. She watched her parents get eaten during the first wave. She survived. However, she was kidnapped by a noble and became his slave along with her other demi-human friends.

She was constantly tortured and had to hear the screams of her brothers as their turn came. Finally, she was given to the slave trader and sold to Naofumi. 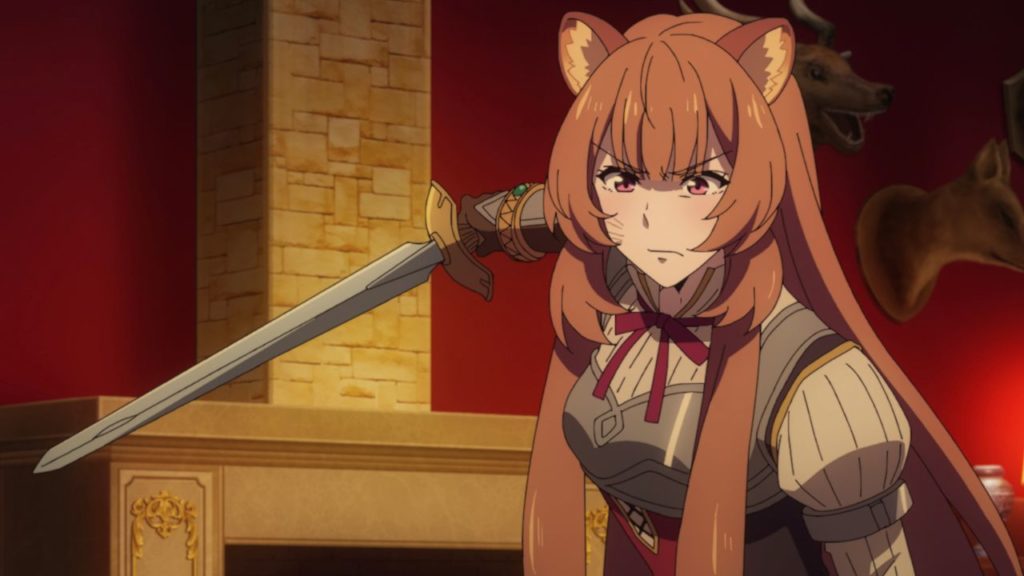 When she started traveling with him, the Shield Hero soon realized that she had horrifying nightmares almost every night.

While he helped her get over her trauma and made her a warrior, she was the one who saved him from the darkness growing inside him.

When he lost his mind to the rage shield, she brought him back to his senses by pouring all the love that she felt for him into his heart. 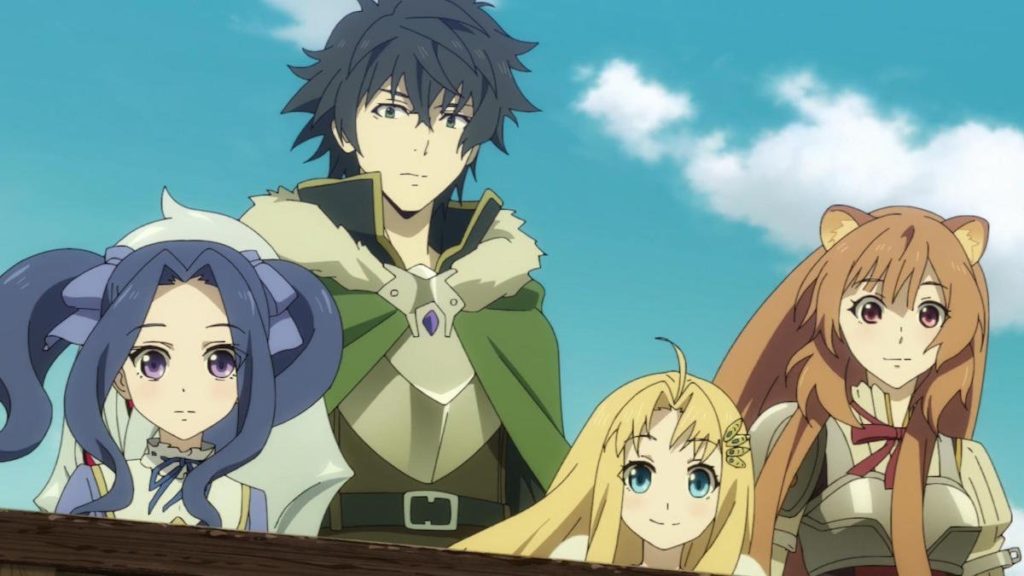 It was super difficult to rank all those amazing characters, especially when you already have a favorite. All of them have some kind of special trait that makes them better than the others in their own way.

This list is what I ended up with after lots of thinking, but why don’t you give us your opinion on the topic in the comments below?